A new gripping film from France about a good student, who at 17, gets pregnant after her first encounter. She wants to continue her education and decides to get an abortion. But this is 1957 and they are illegal in France. It is also illegal to help anyone get an abortion. Her story is at times explicitly painful to watch as she goes from one avenue to the next in her dogged pursuit to regain control over her life. It is so topical now as we know banning abortions only stops safe ones, and drives females into unsafe and dangerous consequences. A must-see movie.

(“Happening (French: L’événement) is a 2021 French drama thriller film directed by Audrey Diwan from a screenplay by Diwan and Marcia Romano, based on the 2000 novel of the same name by Annie Ernaux. The film stars Anamaria Vartolomei and Luàna Bajrami and is set to be distributed by Wild Bunch.) I am in the minority here and gladly state my case. The problem is the casting. Nicole Kidman and Javier Bardem just are not Lucy and Desi. He was missing the style that Desi had when he dealt with Lucy, and Kidman missed her zest completely. I know the movie attempted to show the people rather than the tv stars, but if you can’t get the stars right, the rest of the movie becomes trite and boring. I loved Lucy but couldn’t connect to this film. Ricky and Lucy made you laugh with their side looks and expressions. How could they miss this that? Alana Haim and Cooper Hoffman are delightful in  this campy romp of a sweet tale about a grown up and a teenager. But he the teenager seems older than her., the twenty five year old. They had great chemistry. This is Cooper’s
first starring role. His dad Philip Seymour Hoffman died 7 years ago. Their likeness is eerie. In one scene where Cooper is running, his face was exactly that of his father. The story line gets a bit  wobbly and almost goes off the road but when you like the characters you forgive the writers. Its fun and I enjoyed it. hope they do more movies together. Benicia del Toro’s tale of the life of a drifter and a corrupt psychiatrist connected to the traveling carnival. The ensemble cast includes Bradley Cooper, Cate Blanchett, Toni Collette, Rooney Mara, Willem DaFoe, Richard Jenkins, David Strathiirn, and Ron Perlman. The film has some good scenes but is a bit overdrawn and too long. Cooper and Blanchett carry the film’s tension as the only question to be answered is who is the most corrupt. There are subplots and distractions but the film is uneven and fails to keep the audience in check. It could have been a contender with tighter editing. The one thing you learn for sure is that you don’t want to wind up a “carny”. I loved Maggie Gyllenhaal as an actor, and now she ups the resume with a very sharply directed The Lost Daughter. Olivia Colman delivers with looks, stares and improbable comments a deep sinister portrayal of a mother. The movie has so many dark corners and the covered pot is starting to spill over. Dakota Johnson portrays a different kind of mother, one that doesn’t send chills up your spine. Ed Harris as the kind hotel helper, and Peter Sarsgaard as the Schweppes lookalike poet/writer, round out the cast.

This is Gyllemhaal’s peek into disturbed relationships, and one broken woman. In this film reactions to rudeness and hidden deep hostility are let to stand as pillars of defiance and isolation. Coldness and silence in one look says more than words. You know the volcano is quiet now but it cannot stop the mounting pressure. All the smiles and politeness can’t mask the trauma she is hiding. What did she do? Is the question on your mind as the plot unfolds.

This film has a Bergman quality to it, It’s a feather in the cap to this new director. Look for what’s not said as the culture class between the American obnoxious tourists, and the repressed Brit. which unfold in a small Greek Island in the summer. Coleman and Gtllenhaal should receive recognition for an unsettling view into cruelty masked in smiles. Kenneth Branagh’s intimate look at “the troubles” in Belfast, Northern Ireland in the late ’60s. The Protestants attacked Catholic houses in this once quiet neighborhood
which now pitted friends on opposite sides. Movie shows how Branagh’s family torn by strife had to leave Ireland. It shows the everyday life how it was and then how it is. Movie is made with love but I couldn’t get past how bleak, grey and treeless it was on these brick and cobblestone streets. It made me sad.Bad enough to have to live there but to get attacked for doing so is beyond any reason to stay. Most did. The movie has a tongue-in-cheek quality to it. Either it’s to your liking or not. It was to mine. The story of the Gucci family is full of the rich and the famous lifestyle. The story of fashion is always twofold, upfront and behind the scenes. The movie belongs to Lady Gaga who once again earns her serious acting credentials. Yet I found Jared Leto’s performance of Paolo Gucci to be the fun and whimsy in this eventual tale of betrayal and murder. Al Pacino, now almost Brando-sized, does his usual top performance. A sad side note is that there is no longer any family member in the Gucci empire. The film is worth seeing, especially just for Gaga and Leto. 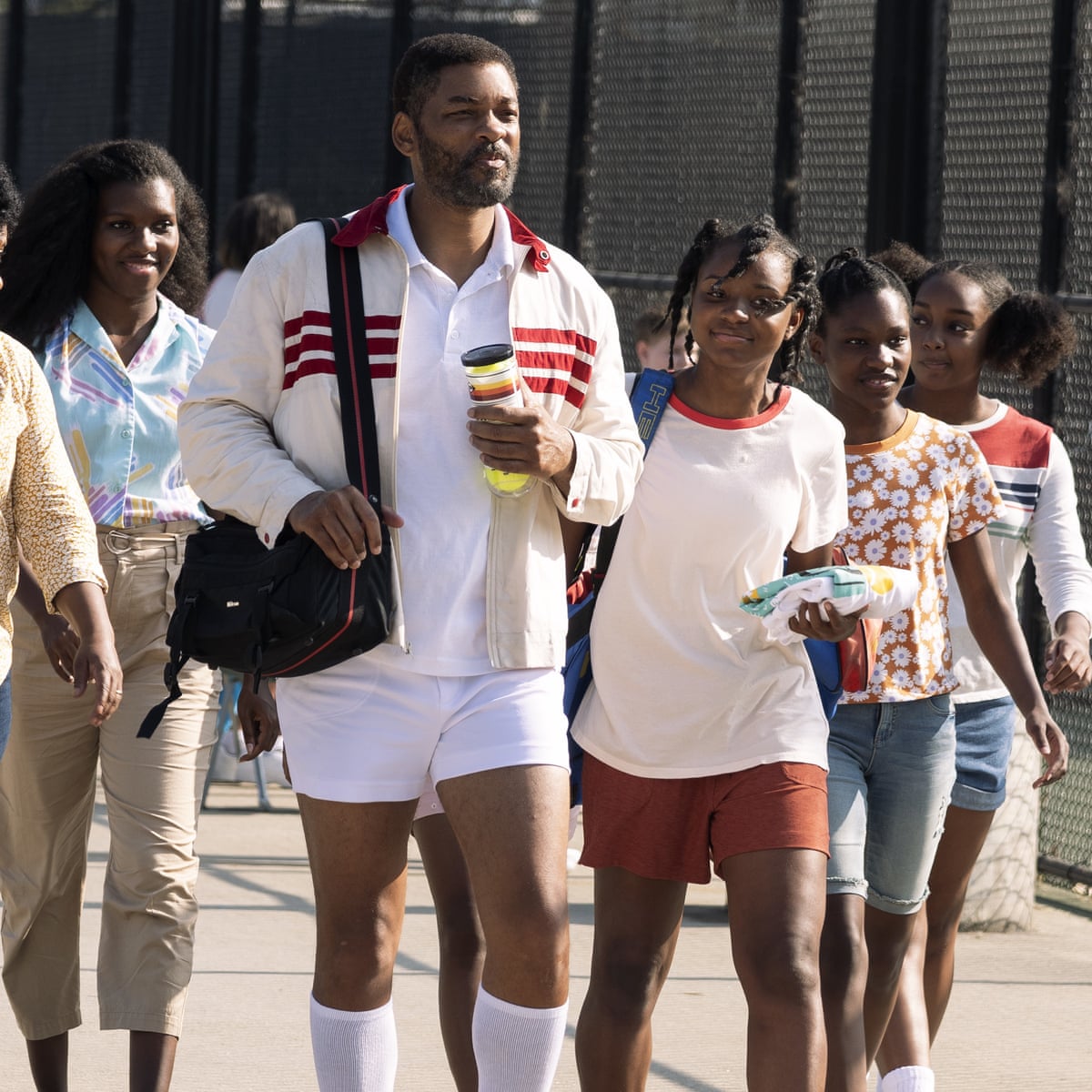 When I went to see the film, my preconceived notion was that Richard Williams was an overbearing tyrant of a father. That view was based on numerous written sources talking about how hard he pushed those girls. When I came out of the movie I viewed him as a loving caring demanding but yet a wise and strong father. He told everyone that he had written a plan for his girls before they were even born. He is the father of five daughters. His plan was for Venus and Serena to become the best in the world. He did not listen to their coaches when he thought the coaches were pushing them too hard or they were wrong. Many times he was told his plan is crazy and will never succeed.

They were living in Compton CA a rough and tough violent street gang neighborhood. When Richard took them to the local tennis courts the young men were hanging around the park who harassed and jostled him and eventually beat him up because he denied them access to his girls. He wasn’t the only strong parent the mother played by Aunjanue Ellis Was as fierce a warrior as Richard was. She believed her duty was to back her husband and not disagree in front of the girls. Yet she was the coach of Serena when he was coaching Venus.  She handled every pressure those girls faced. He demanded excellence out of them as well as scholarship, as they were A students. They knew music. They were cultured, and yet he took them to Disney World instead of practice. He wanted them to be a full person not just a tennis star. One of the lessons that Richard learned was watching what happened to Jennifer Capriati a young whiz of a  tennis player who burned out at 17 and 18 and was in difficulty with men and drugs. Richard Williams was going to save his girls from falling into the pattern of the street or falling into the pattern of false glory for a young woman who only knew tennis. The Williams sisters knew about family, love, honor, commitment, and hard work. They would have a successful life.

Will Smith is terrific as Richard Williams as he has captured his spirit. As bombastic as he could be, he made sure his girls were humble and polite. He had no fear of controversy and stood up to people who said they knew more than he did. In the long run, he was right.  The girls developed strong personalities with a confident winning attitude and they were well-rounded family people. When it came time for money, he turned down a $2 million sponsorship offer, then he turned down a $5 million sponsorship offer,  and finally accepted for Venus a $12 million contract with Reebok when she was 14 years old.

The role played by Ellis is emotional and powerful as she navigated the family while Richard steered their tennis career. Not many men could Do what he did. He navigated against prejudice in the white tennis world. He played on his own terms. He never permitted the girls to play Junior tennis which was at the time, the only way to become a successful tennis professional. Venus Williams’s first professional match was against the number one seed in the world. That’s an accomplishment. I highly recommend going to see this movie.

Margaret Qually stars as a young woman who flees an abusive marriage, taking her three-year-old daughter in the middle of the night. She starts with just the clothes on their back as they eventually move to a homeless shelter for women. Andie MacDowell is her free-spirited, Hippie artist mother, who is bouncing from man to man and mostly living in her car. Ever upbeat and full of denial, she provides comic relief from this tale of abuse and survival.  Qually plays the daughter/mom with similar traits. Smart but impulsive, and therefore reckless. It’s a ten-part Netflix series, hang in there as it’s an emotion grabber. Ridley Scott’s latest stars are Matt Damon, Ben Affleck, and Jodie Comer. The movie told in 3 chapters, Rashomon style¹, is a gritty sometimes brutal telling of the battle between a Squire and a Knight in 14th century France. Scott’s movies include Thelma & Louise, Blackhawk Down, GIJane, Gladiator, and American Gangster.

In this film the first two chapters were written by Damon and Aflect, presenting the male point of view of the combatants. The third chapter written by Nicole Holofcener presents the female view of the wife of the knight, who has accused the Squire of raping her. The winner of the battle of honor will determine whether the accuser (the wife) lives or is burned at the stake. Really tough times! If your husband loses to the death joust, you lose your life. Supposedly that represents God’s will to the 14th century French Church.

The film is somewhat of a tale about honor and maybe about macho image. No matter what it is a compelling telling of a true event. Be prepared for some tough watching.

¹ The Rashomon effect describes how parties describe an event in a different and contradictory manner, which reflects their subjective interpretation and self-interested advocacy, rather than an objective truth.